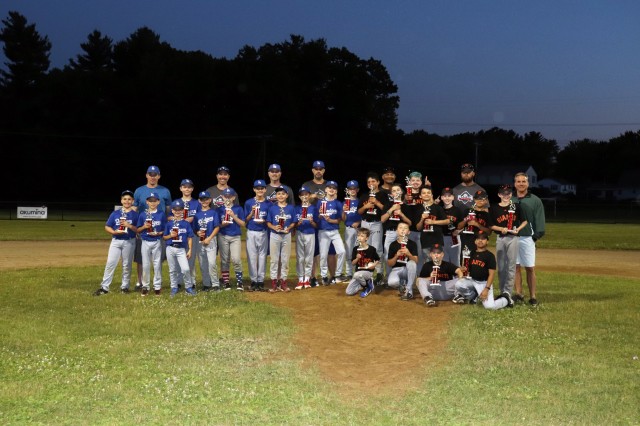 Championship
Giants 10 Dodgers 9 (9 innings)
The Giants and Dodgers, both having only one loss in the regular season, squared off for the championship in what promised to be a heavyweight match.  This game did not disappoint, as emotions ran high for both teams.

Sam Gordon for the Giants pitched two scoreless innings to start, retiring six in a row.  Dodgers starter  Sam Kobs let up only one run through two innings, off an RBI single by Owen Forcier.  The Dodgers roared back scoring four runs in the top of the third after two outs, powered by an RBI double from Jayden Beaulieu.  In the bottom of the third, Max Demers (11 strikeouts) set the Giants down in order, assisted by a beautiful Will McKenney catch in center robbing Braedyn Thyne of extra bases.

The Dodgers continued to pour it on with 3 more runs in the fourth after singles from Daymien Roy and Miles Demers.  Ethan Long (3-5) hit a double and scored in the bottom of the fourth to claw the Giants back to 7-2.  The tables turned in the bottom of the fifth as the Giants scored 4 to  close the score to 7-6, on the back of a 2 RBI triple from Colvin Levesque (2-4, 3 RBI) and 2 RBI single by Owen Forcier, following an intentional walk to Harrison Joshi.  Owen Forcier (9 strikeouts) set the Dodgers down in order in the top of the sixth.  In the bottom of the sixth, the Giants tied the game at 7-7 and left the bases loaded, as Max Demers struck out Colvin Levesque with two outs to force the game into extra innings.

The seventh and eighth innings were scoreless duels, as Owen Forcier and Max Demers traded blows from the mound.  But once these two surrendered the mound due to pitch counts, the scoring opportunities re-opened in the top of the ninth.  The Dodgers recaptured the lead 9-7 when Jake Homsy stole home and Max Demers hit a RBI single to right field.  In the bottom of the ninth, Jacob Fain started the Giants rally with an infield single.  Following an RBI double by Colvin Levesque, Harrison Joshi hit an RBI double to score Colvin and tying the game at 9-9, tip-toeing to third behind the pitchers back.  With one out and the go-ahead run at third, the Dodgers loaded the bases with intentional walks to set up a force at home.  Ethan Long delivered for the Giants with a walk off single to score Harrison Joshi with the game winning run.
--
Orioles 27 Pirates 17
Nationals 9 Angels 6
The Nationals beat the Angels 9 to 6 in game 1 of their playoffs. Aidan Preston had a 2 RBI double and Kevin Hamel made a key double play to lead the Nationals. Jacob Hutchins pitched a strong 3 innings and played strong defense for the Angels.
Dodgers 4 Tigers 3
Dodgers hold off late push from Tigers and get the win in extra innings. Superb pitching from Sam Kobs and Max Demers kept the Tigers' bats quiet. Nathan Perry, Andrew Bulter, and Josh Tripp pitched well for the Tigers. Jayden Beaulieu scored the game winning run in the top of the 7th.
Dodgers 14 Rockies 11
Dodgers top Rockies with solid team contributions. Miles Demers (6 Ks) pitched superb through the middle innings, before turning it over to Cooper Vaillancourt to close it out. Max Demers delivered a home run in the top of the 6th to put the game away. Rick Nunez scored 3 runs for the Rockies.
Diamondbacks 10 Athletics 6
The D-Backs beat the A's 10-6 behind Kelvin Agyeman (2-2, 3R, 2RBI) with hits from Ryan Caruso, Luke Graven, Dylan D'Souza, Tylar Fleury, and Caleb Gianacoplis. Nolan Sullivan shut the door for the Diamondbacks (2 IP, 5Ks) to seal the win. Jace Dillon pitched great for the A's (4IP, 8 K's).
Pirates 18 Athletics 3
Sam Nardone drove in 2 runs for the A's and Jace Dillon added a hit and caught a strong game. Cam Hayes and Will Stanley each drove in 3 while Alexandra Cookson pitched two strong innings with 3 K's and also added 2 hits and drove in 2 runs.
Angels 7 Tigers 6
The Angels edged out the Tigers 7-6 to continue on in the playoffs. Zachary Goulart got the walk off game winning hit, scoring Cole Dube. For the Tigers, Aaron Ackerman and Cole Warshafsky both contributed hits.
Giants 20 Orioles 11
Giants win 20-11 despite walking 17. Colvin Levesque 3-4 3R; Braedyn Thyne 2-2 4R; Harrison Joshi 4-4 4R 6 RBI; Owen Forcier 3-4; Sam Gordon 3-4. Colvin Levesque and Ethan Long pitched shutout innings. For Orioles, Steven Angeles 3-4, almost hitting a grand slam before being thrown out at plate.
Pirates 13 Rockies 7
Will Osborne tossed 3 excellent efficient innings and Brady Wessel went 2 for 3 with a double and two runs. Will Stanley starred for the Pirates with a double a single and 3 RBI while pitching 2 1/3 innings. Dom Maffei pitched a solid 2 2/3 innings and Aaron Cullinane scored 3 runs.
Orioles 19 Angels 15
Dodgers 15 Diamondbacks 5
Timely hitting lifts Dodgers over Diamondbacks. Ted Smiley led the Dodgers offense with 2 hits and 3 RBI. Cooper Vaillancourt added 2 hits and 2 RBI. Nolan Sullivan had 2 hits, 2 runs, including a double for the Diamondbacks. Max Demers closed out the game to secure the victory for the Dodgers.
Giants 11 Nationals 7
In a close game, Braedyn Thyne and Aden Pimental led the offense going 3-3, as well as Ethan Long's 2 out double scoring 2. Sam Gordon and Ethan Long both pitched shut down innings. For the Nationals, Brayden Ouellette got on base 4 times and scored twice; Preston Bois scored 3 with 2 out double.
Pirates 6 Nationals 4
Andrew Thibeault threw four strong innings giving up just 4 runs while striking out 6. Preston Bois added 2 hits and a run for the Nationals. Alexandra Cookson pitched two strong innings and Dom Maffei scored two runs for the Pirates.
Orioles 11 Diamondbacks 5
Giants 10 Dodgers 3
Dodgers with early 3-0 lead mid 3rd with great pitching (Sam Kobs) and RBI double (Damien Roy). Giants score 6 bottom 3rd to take lead, powered by bases loaded double (Harrison Joshi), and added 4 more in 4th. Colvin Levesque and Owen Forcier combined to hold Dodgers scoreless in final 3 innings.
Orioles 1 Pirates 0
Dodgers 9 Orioles 8
In an epic battle, the Dodgers bats ignite to overcome 6-run deficit and advance to AAA Championship. Ted Smiley (2-3), Cooper Vaillancourt (2-3) & Damien Roy (3-3) collected multiple hits for the Dodgers. Max Demers struck the side in both the 3rd and 4th inning. Steven Rosario was 3-3 and scored 2 runs for the Orioles.
External links are provided for reference purposes.Nashua Cal Ripken Baseball is not responsible for the content of external Internet sites.
CopyrightNashua Cal Ripken Baseball All rights Reserved. Privacy Notice
Sports League Management Software byBabeRuth