Nationals are the 2017 Champions! 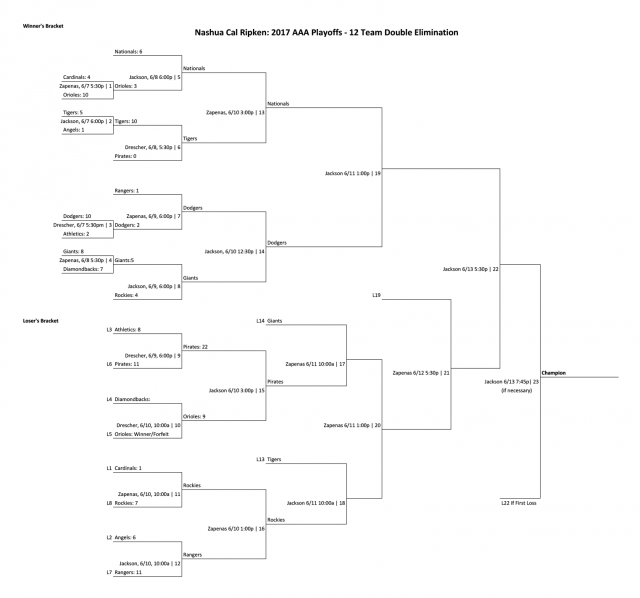 The AAA Nationals won a championship double header 13-1 and 7-5 over the Dodgers to be come the 2017 AAA League Champions.  Congratulations to the Nationals as champions, and to the Dodgers as the runner up.

The first game was marked by solid defense behind the pitching of Gavin Asimakopulos who went three innings allowing only 1 run off 2 hits and 1K for the Nationals.  The Nationals struck in the second inning adding five runs and again in the fourth with seven more runs.  Logen Fier came in the bottom of the fourth and went 1-2-3 to close out the game at 13 to 1.

The second game had great pitching from Gus Smiley from the Dodgers and Chase O'Brien from the Nationals.  Both teams' defenses were making fantastic plays at critical moments.  The Dodgers made several run preventing catches in the outfield and Beckham Laska converting several outs at home plate and throwing runners out on the bases.  The score was 5 to 3 going into the 6th inning with the Nationals on top.  They responded with consecutive key hits by Gavin Martin, Kevin Mackey, and Preston Bois to score two additional runs.  Logen Fier came on to pitch the bottom of the 6th inning.  The Dodgers loaded the bases and scored on a walk and a passed ball narrowing the gap to two runs with two outs.  With the bases loaded Fier struck out the final batter to end the game with a 7-5 win and took home the game ball.
External links are provided for reference purposes.Nashua Cal Ripken Baseball is not responsible for the content of external Internet sites.
CopyrightNashua Cal Ripken Baseball All rights Reserved. Privacy Notice
Sports League Management Software byBabeRuth