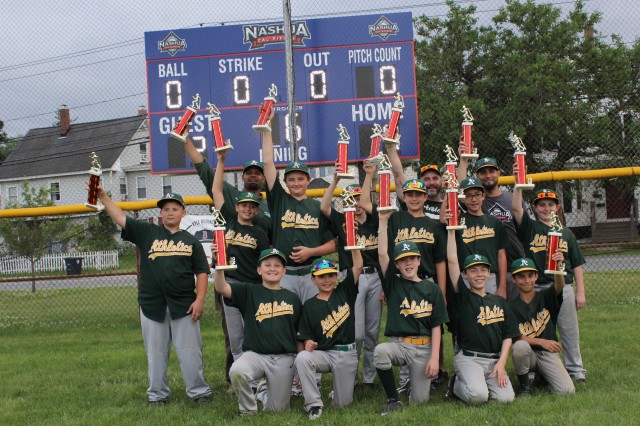 Led by Drew Goulet on the mound and Kyle Young at the plate, the Athletics defeated the Phillies 9-2 in the Nashua Cal Ripken Majors championship game at Murray Field.

The A’s received contributions from the top to bottom of their lineup.  Coach Dana Goulet emphasized, “This Athletics team was the most complete offensive and defensive team I’ve ever coached.  We played a strong, clean game.   The results just reflected our readiness.”

Brendan Doughty got the offense started in the first.  Following a lead-off single by Kyle Young and a walk to Jayce Martinez, Doughty laced a two-run single to right field.

Kosay Tanaka put the Phillies on the board, scoring on a wild pitch in the top of the second.  But Kyle Young answered by driving a RBI single scoring Aiden Fober in the bottom half.

The Athletics opened it up in the fourth, scoring another pair of runs off a RBI double by Jack Desjardins and another RBI single by Kyle Young.  A RBI single by Michael Mosher and a pair of Phillies errors gave the A’s a commanding lead.

With the Phillies threatening to rally in the top of the 6th, league MVP Jayce Martinez induced a 4-6-3 double play to end the game and seal the title for the Athletics.

Drew Goulet struck out 5, giving up 1 run on 1 hit in 4 innings for the win.  Tyler Byrne also pitched an inning in relief for the A’s.

Prior to the game, Jayce Martinez was named the 2019 Nashua Cal Ripken MVP and Leo Depaolo was named the Sportsmanship Award winner.

Nashua Cal Ripken League has been proud to support youth baseball in Nashua since 1952 with over 500 players (ages 4 ½ to 12) on 46 teams across 5 levels of play.

Red Sox 10 Cardinals 9
Josh Alvarez snared a line drive and doubled up the tying run in the 6th to preserve a comeback win. Beckham Laska was 3-4 with 2 RBI, Alvarez scored twice, and Elias Parker-Pimental added a hit in the rally from a 6-run deficit. Michael Witkowski pitched 3.1 innings in relief for the win.

Phillies 4 Cardinals 3
With the bases loaded and 2 outs in the bottom of the 6th Josh Caruso (2-3) lined a single up the middle to help the Phillies defeat the Cardinals 4-3. The Phillies received solid pitching from Adam Murray & Logen Fier. The Cardinals were led by Mason Tanner (10K) and Alex Landry who hit a homerun.

Athletics 5 Giants 4
The Athletics came out on top 5-4 after 8 innings of intense baseball. A’s bats were lead by Kyle Young, Drew Goulet, and a 2 for 2 performance by Aiden Fober. Leo D’Paolo pitched 4 great innings and had two hits of his own.

Athletics 8 Phillies 1
The Phillies and A’s battled in the winner’s bracket championship Saturday evening. The A’s combined for 8 hits. Johnny Canaway played a stellar center field and caught 5 fly ball outs on own. Beau Dubois had an RBI and base hit for the Phillies