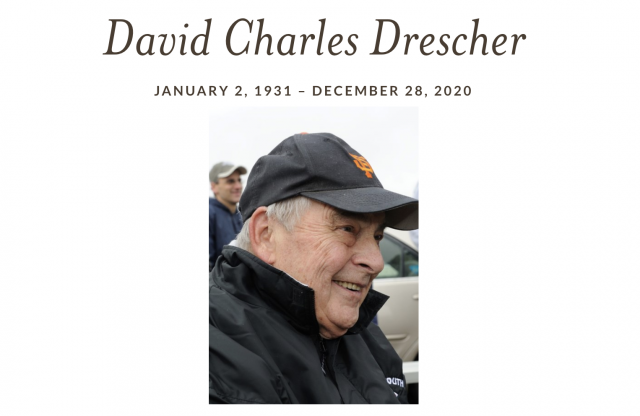 David Charles Drescher, 89, passed away on Dec. 28, 2020 at home surrounded by family and his loyal dog Allie. Dave was born Jan. 2, 1931 in Manchester, NH to the late Mary (Wyskiel) and John Drescher. He was introduced to Joan Talty on a blind date arranged by mutual friends. They married in 1958 at which time they moved to Nashua where they raised four children.

After graduating in 1948 from St. Joseph High School in Manchester, Dave earned a degree in math from St. Anselm College in 1952. He then studied electrical engineering, earning a BS from UNH and a master’s degree from WPI. Dave worked as an electrical engineer at Sanders Associates & Lockheed Sanders for 30 years.

Dave was involved in youth sports for many years. He coached the Giants, a team in the Nashua Cal Ripken youth baseball league, for 54 years, including this past season. This long-term and unusual commitment brought David great pride and joy. He was known for his Mother’s Day tradition of making sure each player on his team had a flower to give to his or her mother. In 2010, a baseball field in Nashua was named in his honor and in 2011, he was inducted into the New Hampshire Cal Ripken Hall of Fame. David found lifetime friends in many of his assistant coaches. In addition to coaching baseball, he assisted in coaching high school basketball with Bishop Guertin, Manchester West and Manchester Central.

In addition to coaching and work, Dave also enjoyed going to Red Sox games and his camp in Meredith that he and his father built by hand over 65 years ago. He looked forward to attending Saint Anselm basketball games and was welcomed at games by the players. He was an avid reader, especially of history, and would often visit historical sites on vacation.

The family wishes to extend special thanks to Dave’s medical team who worked tirelessly in the past month to improve his quality of life: Dr. Kosofsky. Dr. Joffre, Dr. Yong and Dr. McDonah. For several years, Dave received exceptional care from Home Health and Hospice, especially nurse Kimberly Vissa.

In addition to Joan, his wife of 62 years, David is survived by two sons, David of St. Louis and Stephen of Nashua and two daughters, Kristen of Omaha and Lisa of Nashua.

Condolences may be left at www.Zissweeneyfuneralhome.com